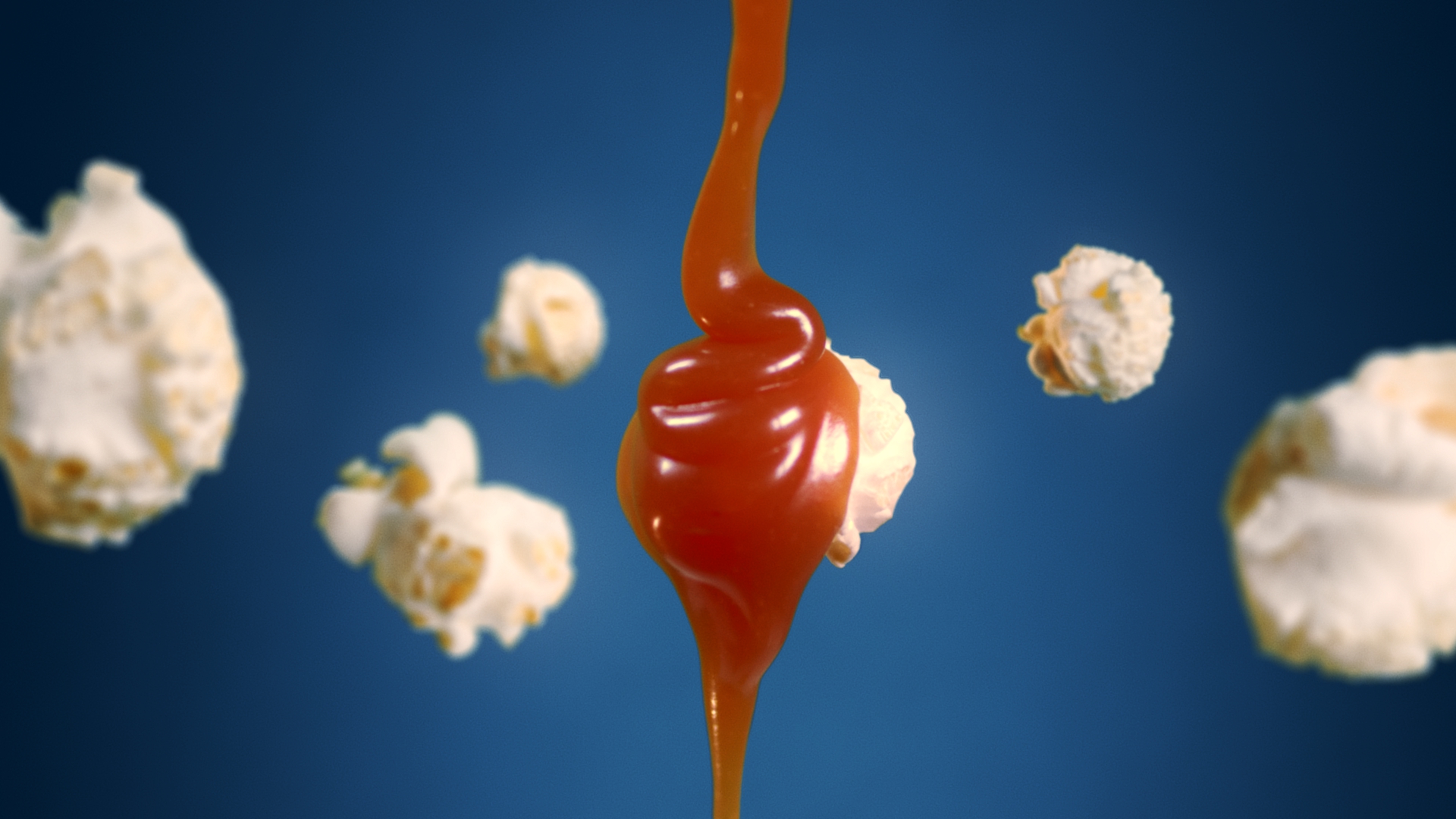 These fun product shoots were designed to showcase the incredibly creative flavours. Energy and playfulness were a top priority for this campaign, so we wanted to abstract the flavours and show the ingredients in their different states colliding with each other. The sequence was broken down into four stages: popcorn and chocolate chunks in separate explosions, popcorn and chocolate chunks colliding together in an avalanche effect, melted chocolate draping over a piece of popcorn, and the final product in a last explosion.

To achieve these different shots, we designed multiple setups that would mix physical effects with visual effects. Let’s break them down! (We will be talking about the chocolate version, but the methods were the same for caramel and cheese).

The explosion effect for the separate ingredients and the final product was fairly simple. Our producer Amy Kellie loaded the ingredients into a pan and simply threw them up in the air against a blue screen. Each ingredient was thrown up separately and composited together on post production - alongside the first product line up shot. We knew we wanted to see the ingredients dance in mid air, that’s why we shot with a Blackmagic Ursa Mini Pro 4.6K G2, allowing us to see the popcorn in a wonderful 300 frames per second. You can see behind the scenes of this on our Instagram.

Ingredients colliding in mid air is an effect that audiences have seen a thousand times, so we wanted to go further than simply throwing them at each other and filming the collision. Instead, we went for an avalanche effect, showing them tumbling through the air together. This effect was all in camera with no visual effects. To achieve this, we filled two conjoined barrels with loads of popcorn and chocolate chunks before attaching the barrels to a power drill via a bracket. This let us spin the barrels at a high speed and film through the opposite end, seeing all the ingredients swirling around in slow motion!

So how do you drip melted chocolate over popcorn that’s suspended in the air? All you need is a fishing wire, a needle and a funnel. We threaded the fishing wire through a piece of popcorn and tied a small knot under it to keep it suspended in the right place. Then we threaded the top of the fishing through a funnel. This meant that when we poured the melted chocolate into the funnel, it would attach itself to the wire and slowly run down onto the piece of popcorn. Just make sure there is a bowl to catch the mess at the bottom! We then added digital camera movements and added clean plates of popcorn into the background to give the image some depth. We hope you agree the final effect looks fantastic.